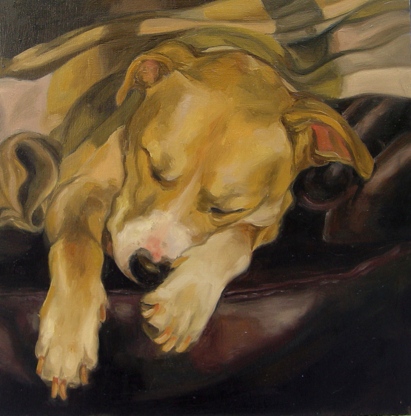 At 2:45pm this past Thursday, March 16th, we helped our dog Pete cross the “Rainbow Bridge”. He was, we think, approximately 13 years old. His health, always moderately precarious, had taken a turn for the worse in the past week. Over the weekend, he stopped eating, started sleeping a lot, and could no longer walk. Food and Walks were his two favorite things. His hips had been causing him trouble in the past years, but he finally could no longer support himself. It was time. My husband made the call, the doctor came to the house. Pete enjoyed the rare winter sunshine before we brought him back in. He left us quickly, he was ready. He was a good boy. Our Malamute, Darcy passed about three years ago while we were still in Lewiston, so Pete is now with her.
I write Pete’s story because he wasn’t the perfect dog, and before he became the gentle old soul that left us, he caused us much distress with his impulsive stubbornness. His learned behaviors could have made us return him, but we just couldn’t do it. We learned so much from him, and he was very loved, despite his issues. I stress this because, when we adopted him,  we assumed he’d be a “good dog” without baggage and issues, thankful that he was no longer in the pound. Dogs don’t think that way. He reverted to his old ways once he got comfortable with us. I blame his previous owners, but not him. We did everything we could to make his life better than his time before us. We were rewarded with a gentle, old soul. He tried so very hard to be good. In his memory, we will eventually venture out to the local shelter and find a furry friend to fill the holes Pete and Darcy left in our lives.
Yes, he was a “pitbull mix”. I had known two growing up, and they were strong, stubborn dogs, but not dangerous or mean. Pitbulls are some of the most common dogs you see abandoned in shelters. If you google “American Stafforshire Terrier”, you would see dogs that look very much like Pete. When we adopted Pete we not told about getting Liability Insurance. We were offered vouchers towards training sessions. Two things that we will be doing again when we find our next furry companions.
We adopted Pete late 2009. My husband was in his last year of law school, and we really wanted a companion for Darcy. We did a lot of web surfing, craigslist, petfinder. We finally made the trip out to Kitsap County Humane Society to meet another dog, and found that the one we came for had been adopted. We hung around and checked out each kennel. Dan noted one dog that he thought was in foster care. He was a tan/white pitbull mix. He had literally shut down, lying on his bed, facing the wall. He looked up at us when we came to his door, but he didn’t bother to get up.
Turns out, he had been returned. Twice. He HATED cats, they said. And he didn’t get along with one of the other dogs. He was approximately 5 or 6 years old. His teeth were chipped and never in great shape. He had what looked like scars on his tail and his lower back area. His muzzle was a little scuffed up. He had the worst breath, snored 18 different ways, and often had gagging/hacking spells. But he had those big, mascara’ed eyes, and kinda walked over like Eeyore. He would climb right up on your lap. All 70+ pounds.
So we decided to meet him and see if he would be a good fit for Darcy, since we had brought her with us. Dan took Darcy out of the truck, and she completely ignored him. It was the perfect response. He seemed happy. The staff told us that if we didn’t adopt him, it was probably the end of the line for him. The hard sell. We filled out the paperwork and brought him home. He was a staff favorite, it seemed. A number of them came up and quietly told him, “Don’t come back”.

The Wubby Trio – 3 (6×6) oil on panel
For the first couple weeks things were pretty good. We were very structured with him, making sure to correct him if he acted protective towards us vs Darcy; an attitude that subsided quickly. He was a follower and adored Darcy. He was happiest with a tennis ball in his mouth. He enjoyed headrubs and buttrubs, sleeping in his bed, curling up under or on a blanket. When we finally got a couch, he declared most of the couch his. He could not jump, we discovered. We had to theorize then his hips were probably not in great shape. He was never food aggressive and always loved to eat. I did notice he got nervous around teens/kids. He did start show aggression towards other dogs (never towards Darcy) but it seemed to be as if he was trying to protect us, or himself. People came up to us during walks to thank us for taking him in, being a pitbull.
In the first couple weeks/month of the adoption, Pete got, what we think, was a tummy ache. We let him outside and he decided to “self medicate” and stood in our front yard eating as much grass as he could hold. I convinced him back inside, and later, Dan let him out, where he did it again. We were completely puzzled. Eventually we took him to the vet and he said that Pete had given himself colitis by eating so much grass. The cracked teeth? “A fence biter” the vet declared. Most likely he was left unattended in a back yard and was biting the wire fence to get at what ever was teasing him on the other side. Over the years, we determined he was probably neglected and maybe even somewhat abused. And maybe an evil cat that made his life hell. All guesses.
Late Spring 2010 we walked Pete & Darcy to the local Starbucks coffee shop. We sat outside on that rare sunny day, the dogs on leashes lying on the sidewalk. Being Seattle, lots of pedestrians were walking by. One lady stepped, twice, very close to Pete’s head. He must have been startled, he got up. With no warning, to our horror, he reached out and nipped the back of the woman’s leg, causing her to yell out. I walked her inside to look at her calf. Pete had caused a “pinch bite” through her jeans. It looked like a bad scrape, a little blood welling up. I took a picture on my phone. I offered to call an ambulance, which she declined. I gave her my contact information. We offered to help pay for her out of pocket expenses. She seemed pretty level headed, even saying she had great health insurance. We left. We called animal control and they told us that the victim had to call before they would come out. She did, and once Pete was seen (“booked”), we paid the fine ($200+) and quarantined him for the requisite time.
I could give you the whole blow by blow but I prefer just to say that by the end of that week, she decided to sue us. She hired a lawyer friend who called us negligent dog owners, irresponsible people and that our dog was a dangerous pit bull, citing all the bite statistics. She said we never offered to help pay for her care. We were served the formal paperwork a couple months later. We hired Adam Karp, Animal Rights Lawyer, to help us through the process. The suit was eventually settled for much less than the original amount, but causing us much grief.
With Pete’s health issues (A thyroid issue was diagnosed five years ago, along with the arthritis in his joints), emergency care insurance (he attempted to consume some of the wall to wall carpet in our rentals), Liability Insurance and the lawsuit, over time our $25 initial investment ballooned to well over 8 thousand dollars, possibly even hitting the 10 thousand dollar mark. We laugh quietly that he was, by far the most expensive discount rescue dog we ever had.
Pete was never a model citizen but never hurt another person/animal/plant forthe rest of his life. We hired a trainer to help with his impulsiveness. It did some good. We got Dog Liability insurance to cover both dogs, since our Malamute was also considered in the “dangerous breed” category. Pete showed more stubborn behavior around women, and we had to theorize that he might have been abused by a woman, or, perhaps women tended to be more nervous around him, and he picked up on that. We always watched him very closely. We had few issues with him around men.  When he developed a bond with you, it was for life. He never forgot. He loved our daughter, who was born in December 2013, and showed much patience with her, under our supervision. When we moved back to Western Washington in the Fall of 2016, I looked into the backseat of my car and saw my daughter, asleep in her car seat, holding on to Pete’s ear. He was sleeping right next to her. He never let an adult do that, let alone touch his ears, without flinching.
When Pete passed, Dan remarked that it was the first time in 17 years that he had been without a dog. The same for me. Memories of both Pete and Darcy linger with us, and they are sweet, sad, funny, and all good.